Claire Mesnier, Alpine HRD: “I am present at around ten F1 Grand Prix throughout the season”

[REPORTAGE] The bleachers and the track are empty, but the paddock* is bustling. This Thursday morning, in view of the Grand Prix de France which takes place at Le Castellet, on the Paul Ricard circuit, the engineers race from an engine to a chassis and the staff of the various teams file from one meeting to another.

They are men, for the vast majority of them. Among the pilots, no woman will start on Sunday. Behind the scenes, they are not much more numerous. In the motor home* from one of the teams, a woman, however, continues to meet and meet in video with her other teams. Her name is Claire Mesnier and it is the Alpine HRD, a rather special company. A 100% subsidiary of the Renault group, the Alpine brand manufactures production cars (the A110 berlinetta), but it also has an F1 team that bears its name. And the distribution of the workforce is rather sporty:

She logically devotes more time to team (this is what the team is called) than at the factory that produces everyday cars.

An HRD that cuts into four

However, do you have to have fallen into the car pot to work in the holy of holies, the queen discipline of motorsport, namely the Formula 1 world championship? ” Not really. In fact, I entered HR at Renault in 2001, directly after my studies, more for its French social laboratory side, than by passion for speed”. An angel passes by, in the silhouette of Jean-Paul Sartre, standing on a barrel in front of the entrance to Boulogne-Billancourt.

The world of performance and timekeeping, the former graduate of HEC then of a 3rd cycle HR of Paris-Dauphine discovers it twenty years after her debut in the group: at the beginning of 2021, when Luca De Meo, the new boss of the group entrusts him with the human resources of Alpine, which he has just brought into the great circus of Formula 1.

Since then, it has been divided into three and even four, navigating between the team headquarters in Enstone, Oxfordshire where the F1s are made and where their aerodynamics and chassis are designed, but also Viry-Châtillon, in Essonne, where the engines are created. Return trips plus regular visits to the Dieppe plant, where the standard Alpines are assembled. “In addition, I am present on a ten grand prizes throughout the season. »

It hunts all profiles except pilots

For the love of sport? ” Not only. We do not recruit runway engineers on Cadremploi, ” smiles this pragmatist. It is in the paddocks that ties are forged and the right candidates are approached, often from other teams. But also outside. Because in this ultra-closed environment, only 60 professionals are authorized to be present at each race and in each team, according to the regulations of the FIA ​​(International Automobile Federation), and no more. This limits the number of candidates for debauchery. Claire Mesnier is in charge of recruiting them, like the team manager, a role today held by the Romanian-American Otmar Szafnauer. Only the recruitment of pilots escapes him: “They are not salaried, it is commercial contracts that bind them to the stables”.

A chance for her? She does not venture on the subject. But given the stormy summer soap opera that shook Alpine, and which began with the departure of Fernando Alonso from Aston Martin, which continued with the dubbing of Australian Oscar Piastri, before he signed with Mc Laren, the HR department must be rather relieved that Laurent Rossi, the general manager of the brand manages these contracts directly.

She is no less busy, because even in F1, which is, a priori, a dream job for fans of the genre among engineers, the turnover exists. “It is around 10 to 12% in our team”. Leaders who must be replaced quickly, not to mention the new ones who must join them. Because the workforce must increase to meet the group’s new ambitions: to make Alpine the F1 world champion in 2026.

What does the team lack to become one? “The difference in lap times between our cars and the best today is a blink of an eye” summarizes Otmar Szafnauer, his team manager. Microseconds that require substantial investments in equipment, but also in human skills, and this last point is the responsibility of the HR department. In addition to car engineers, it also recruits IT specialists. A field in which it should not be very difficult to attract the best when you are ranked 4th in the constructors’ world championship? “Not necessarily, because we are in competition with the Gafam”. Even the leading stables are struggling to attract these aces.

The F1 objective is not the only one appearing on the roadmap that Luca de Meo has entrusted to Claire Mesnier. She must also feminize the brand. For noble post-#Metoo reasons? Not only. ” In our clientele, there are only 7% of women, it is less than at Porsche”, a brand nevertheless known for its virile cars.

So the HR department gets busy recruiting girls, in F1, like at the Dieppe factory, so that other women identify with them, and that they are convinced that the Berlinettes are also cars for them. A new clientele that Alpine really needs. In Dieppe, nine A110 models are produced every day, while the production capacity of the factory is thirty cars daily.

After a year and a half, the feminization effort nevertheless began to bear fruit. Today, the director of Dieppe is a director, and about ten women work in the paddock. As Ellie Williams that Claire Mesnier recruited last year at Lotus. She is in charge of the aerodynamic parts of the cars of Fernando Alonso (until the end of the season) and Esteban Ocon. During the race, it is she who is in charge of the pit stops, giving the boys in charge of changing the tires the green light which authorizes the pilots to return to the race. 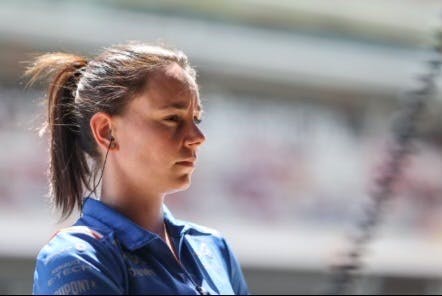 Recruit in other sectors of activity

In cars, there are 2% of girls in basic training, 8% in the best schools.

But this feminization of the profession is not obvious. Large schools ? “At Estaca, the top French mechanical engineering school, there are only 8% girls”. And in the CAP, BEP, Bac pro and specialized BTS that she recruits for the factory, it’s worse: “They are barely 2%”. So, when she can, she will poach them elsewhere, for F1 as for series production. One of the logistics managers of the team comes from L’Oréal, the other was poached from Amazon. Because logistics in F1 is a headache, a huge traveling circus of 60 people, equipment and removable infrastructure that must be moved across the planet, from Bahrain to Melbourne and from Montreal to Sao Paulo. So, in addition to these more mixed recruitments than before, and to make girls even more aware, Claire Mesnier set up Operation Rac(H)er.

Its goal ? Arouse the vocations and talents of pilots in girls, from the age of 11, in karting, to encourage them to go further, to push them towards engineering schools and driving schools, up to F1, why not. At the same time, she works with a British university which wishes to study the specificities of women in terms of piloting through their cognitive abilities. The old refrain that tells us that women can do several things at the same time, unlike men, which is a necessary quality in a racing seat, will it be established? Reply shortly. As for the crowning of a female Formula 1 world champion, we will have to wait a little longer. The time for little girls in karting to become great drivers.

Why one in three recruiters is considering changing jobs

What is your strength as a restaurant manager?

Marie-Claire Lemaitre, Mercuri Urval France: “It is no longer enough to have an employer brand to attract talent”

Bonus-malus on short contracts: penalties are extended for employers who abuse them

What is your strength as a restaurant manager?